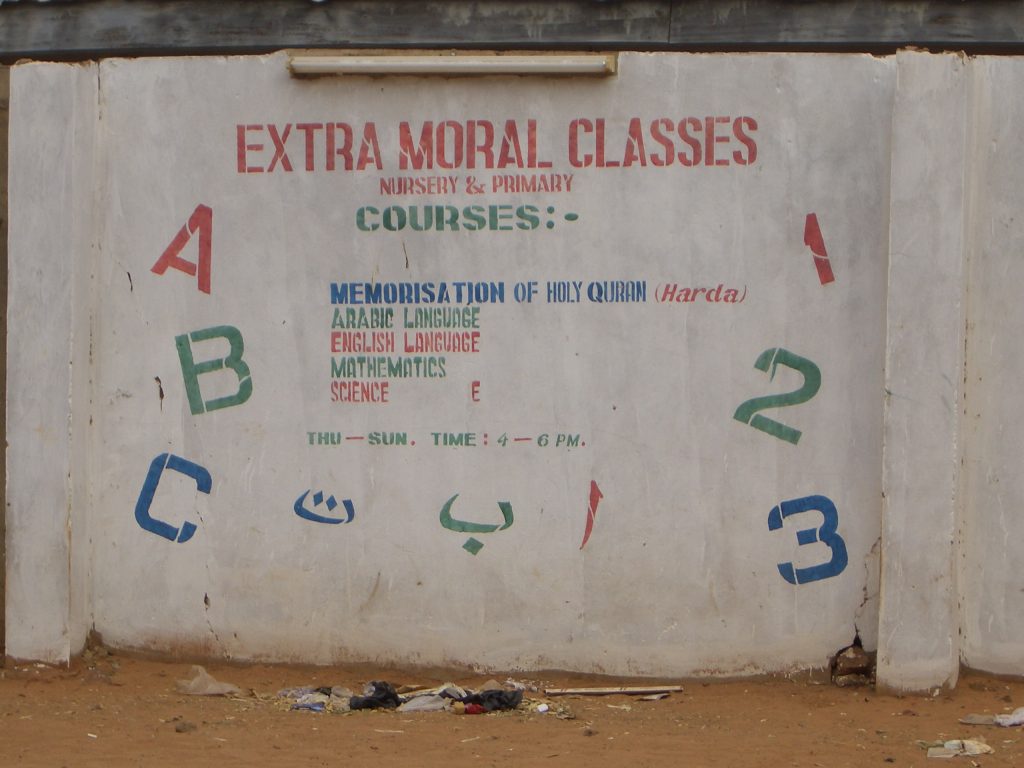 My first book,Â Muslims Talking Politics: Framing Islam, Democracy, and Law in Northern NigeriaÂ (University of Chicago Press, 2016) examines the relationship between Islam and democracy through the lens of Nigeria’s controversial and divisive experiment with implementing Islamic criminal law through the democratic process in the late 1990s and early 2000s. As the Press describes it:

For generations Islamic and Western intellectuals and policymakers have debated Islamâ€™s compatibility with democratic government, usually with few solid conclusions. But whereâ€”Brandon Kendhammer asks in this bookâ€”have the voices of ordinary, working-class Muslims been in this conversation? Doesnâ€™t the fate of democracy rest in their hands? Visiting with community members in northern Nigeria, he tells the complex story of the stunning return of democracy to a country that has also embraced Shariah law and endured the radical religious terrorism of Boko Haram.

Kendhammer argues that despite Nigeriaâ€™s struggles with jihadist insurgency, its recent history is really one of tenuous and fragile reconciliation between mass democratic aspirations and concerted popular efforts to preserve Islamic values in government and law. Combining an innovative analysis of Nigeriaâ€™s Islamic and political history with visits to the living rooms of working families, he sketches how this reconciliation has been constructed in the conversations, debates, and everyday experiences of Nigerian Muslims. In doing so, he uncovers valuable new lessonsâ€”ones rooted in the real politics of ordinary lifeâ€”for how democracy might work alongside the legal recognition of Islamic values, a question that extends far beyond Nigeria and into the Muslim world at large.Â

My newest book,Â Boko Haram,Â co-authored with my graduate school friend (and leading scholar of northern Nigerian popular culture) Carmen McCain, is the first to combine an analysis of Boko Haram’s emergence and activities as one of the world’s deadliest terrorist groups with a social history of the conflict and its impact on Nigerian social and cultural life. Part of Ohio University Press’s award-winningÂ Ohio Short Histories of AfricaÂ series, it is not only an original piece of scholarship but the perfect book for any reader looking to know more about one of the world’s biggest stories. As the Press describes it:

From its small-time origins in the early 2000s to its transformation into one of the worldâ€™s most-recognized terrorist groups, this short book tells the story of Boko Haramâ€™s bloody, decade-long war in northeastern Nigeria. Going beyond the headlines, including the groupâ€™s 2014 abduction of 276 girls in Chibok and the international outrage it inspired, it provides readers new to the conflict with a clearly written and comprehensive history of how the group came to be, the Nigerian governmentâ€™s failed efforts to end it, and its enormous impact on ordinary citizens.

Drawing on decades of research,Â Boko HaramÂ is a timely addition to the acclaimed Ohio Short Histories of Africa. Brandon Kendhammer and Carmen McCainâ€”two leading specialists on northern Nigeriaâ€”separate fact from fiction within one of the worldâ€™s least understood conflicts. Most uniquely, it is a social history, one that tells the story of Boko Haramâ€™s violence through the journalism, literature, film, and music made by people close to it.

I’ve also published a number of papers, primarily on Islam and politics orÂ federalism and ethnic conflict in Nigeria: